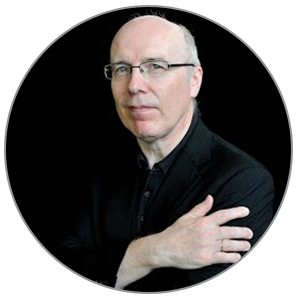 Michael comes from a Belgian-English family with a musical background.

He began playing the piano and the violin at a very young age, and at only eleven years old, he founded one of the most prestigious chamber music groups in the world, the Brodsky Quartet, with which he performed concerts all over the globe for over 25 years. He studied at the Royal Northern College of Music (Manchester) with Yossi Zivoni and at the Mozarteum (Salzburg) with Sandor Vega.

Michael’s first compositions include a concerto for cello, written at fourteen, and several string quartets written even earlier. On many occasions, he himself has performed his own violin concerto. His concerto for trumpet and orchestra will debut in 2013.

At fifteen years old, he formed and began directing the Cleveland Concertante.

In the jazz world, he has worked with Ian Carr, Dave Brubeck, and Evan Park; in the rock world with artists such as Elvis Costello, Ofra Haza, Björk, Paul McCartney and Lou Reed; in that of flamenco and beyond with Raimundo Amador, Estrella Morente, Tomatito and Kiko Veneno, and with classical artists such as Yehudi Menuhin, Charles Rosen, Dimitri Ashkenazy, María Joao Pires, Anne Sophie von Otter and Ara Malikian, among others.

His arrangements of the music of Shostakovich, Gershwin and Falla are highly demanded, and his soundtracks (Siempre Hay Tiempo, 2009) and songs (Cartas a Julieta, 1992) have received very positive reviews. Some of these songs have been performed by Miguel Poveda, Chris Porter, and Björk among others, and his ballet (Harold in Islington, published by OUP) has been Thomas’ most widely performed work (through tours in Canada and the US with the David Earl Dance Theatre). The work on his most recent project includes the direction and arranging of songs from the album La flor del frío by Enrique Moratalla.

During his career, he has enjoyed close artistic relationships with the composer Witold Lutoslawski and with the songwriters Elvis Costello and Kiko Veneno.